Destination: LOVE (Out of Print) 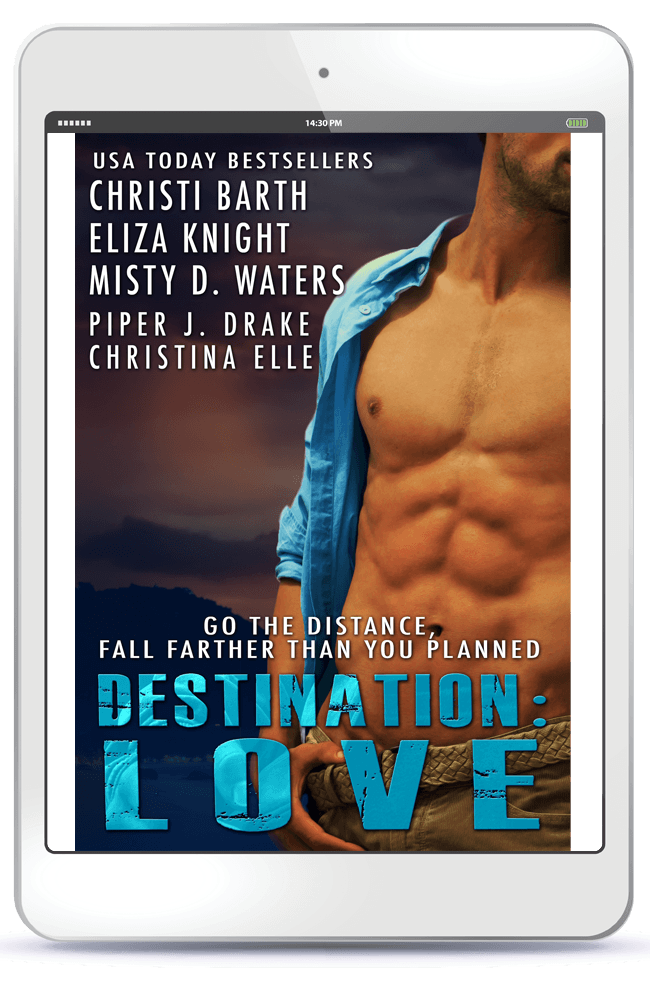 Go the distance, fall farther than you planned…

Don’t bother with your passport – you can watch our five HOT couples fall in love from the comfort of your couch! USA Today bestsellers Christi Barth, Eliza Knight, and Misty D. Waters, and Piper J. Drake and Christina Elle take you along on sexy, romance-drenched vacations all over the globe. The couples embrace a mix of Chinese and Indian beliefs to passionately fall for one another in an all-encompassing sexual manner. Enjoy the exotic settings, the steamy vacation flings that become something more. Take the plunge with five couples as they throw caution to the wind and give in to temptation. The final destination in this itinerary is love, and you’re in for the trip of your life.

Cruising Toward Love by Christi Barth

Can an unexplained breakup and ten years of heartache be cured by the romance – and endless buffets – of a tropical cruise? When her sister is left at the altar, small town librarian Zoe Balis jumps at the chance to take the bride’s unused ticket for the honeymoon cruise. But she didn’t count on sharing a cabin with the man who broke her heart ten years ago!

Wherever You Are by Eliza Knight

After life takes a heart-breaking turn, Calista Adams indulges in a fling while on vacation. But that steamy encounter fills her heart with something she thought never to have again. Maxwell Dane can’t stop thinking about Calista, but he’s home in Paris, she’s an ocean away. Until Calista takes a nine-week sabbatical to travel Europe. With a second chance in sight, Max won’t let her push him away. This could be the forever kind of love, and there’s only one way to find out.

Tell Me No Lies by Misty D. Waters

A handsome B&B owner plus an exotic vacation equals a rare opportunity for overworked single mom Amelia Spenser: a chance to be someone else. For one week, she’s free to be anyone he wants. And she wants to be his perfect match. He doesn’t have to know who she really is. What’s a few lies for the sake of a week they’ll never forget? It’s not like they’ll fall in love…

Security chief Michael Hunt brings in wet work specialist Sushar “Su” Sakda to pose as his woman, find his mark, and eliminate the threat—an assassin hunting in his organization. They make a potent pair for this job, and if they survive, their sizzling pretense could become the real thing.

Anywhere With You by Christina Elle

Teegan Michaels has attended six weddings for her sorority sisters dateless and she refuses to go to the last one alone. Not when she has a perfectly respectable—not to mention hot—NFL player ready to save her from humiliation. Who cares that he’s the bride’s ex-fiancé and only wants to go for revenge? What’s the worst that could happen?

***This anthology is filled with original content, brand new from the authors. On sale for a limited time only!***